Why is there no cure for HIV/AIDS when we have 1 million plus health experts in the world?

Because the scientists who are officially recognized to find the cure are not looking in the right direction. Chemical drugs cannot cure HIV/AIDS. This has been proven beyond doubt. Many research studies have been published to show that natural products particularly those that are rich in polyphenols have the potential to cure HIV/AIDS.

In the article cited below:

Identification of phenolic compounds and their derivatives interfering the several steps of the viral life cycle of the human immunodeficiency virus type 1 (HIV-1) is focused for the development of novel molecules for the treatment of AIDS. Several phenolic compounds isolated and characterized from natural sources have been studied in detail and found to exhibit inhibitory effects against different steps of the HIV-1 life cycle, including virus-cell fusion and virus absorption, reverse transcription, integration (IN) and proteolytic cleavage. In the review, we are summarizing some strong evidences demonstrating several phenolic molecules and their derivatives from natural sources display promising anti-HIV-1 activities. The anti-HIV compounds have been organized in this review according to their mechanism of action in the life cycle of HIV. We also mentioned some findings using in silico approaches, like virtual screening, docking, neural network, etc., and even the chemogenomics and/or functional genomics approaches could be useful for the quick identifying promising new lead anti-HIV molecules without having any other unwanted pharmacological effects. Plants having large amount of phenolic compounds, can be considered as strong sources of molecules for the treatment of HIV-1. Despite the continuous advances made in antiretroviral combination therapy, AIDS has become the leading cause of death in Africa and the fourth worldwide. Today, many research groups are exploring the bio- and chemo-diversity of the plant kingdom to find new and better anti-HIV drugs with novel mechanisms of action.

To corroborate the hypothesis of the authors, a research institute in Tunisia claimed it cured 1560 HIV patients by using an ordinary dietary supplement. The institute was unaware that the supplement has the highest concentration of polyphenolic content among food plants in the world. The excerpt from the interview is shown below:

From Gafi Institute came the report below:

Joan Shenton, award-winning British producer and journalist referred to the claims of AIDS in Africa as a bad science; I agree absolutely with that. During our five years of research, the Gafi Institute discovered a couple of drugs which have over the last ten years transformed so- called AIDS patients to test negative after a short period of use. One of such is Joby formular, now known as Jobelyn. Jobelyn was discovered by the Gafi research to be just a herbal therapy used for replenishing lost body nutrients.

I should state that this therapy transformed 1520 Aids patients who were administered with the therapy by doctors at the Gafi institute, in six months to test negative. If a nutrient replacement therapy/supplement can transform a patient’s status from positive to negative, I think there is no better proof to counter the lies saying AIDS is a killer disease rather than a state of immune deficiency which can be as a result of well over sixty different diseases or conditions.

Please see the link below:

For the full research publication on the HIV at the Military Hospital and Police Hospital in Lagos, please click the button below:

The polyphenols content according to the published article is as shown below: 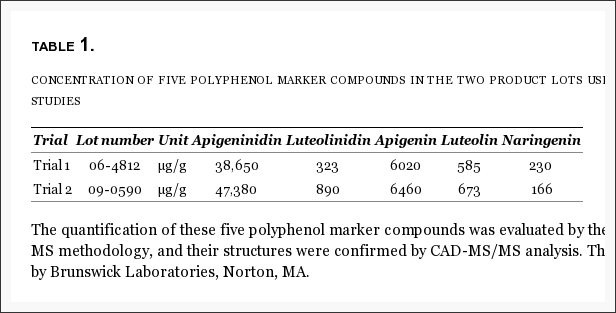 If the scientists diligently pursued the lead on the potentials of polyphenols, they will sooner than later find the cure for HIV/AIDS.

CAN POLYPHENOLS IN TEA AND COFFEE PREVENT OR TREAT ALZHEIMER’S (DEMENTIA) DISEASE?